From Groot Constantia to Google: 1865 to 2010 – a colourful history of brands & branding in South Africa by Affinity Advertising & Publishing.

“…the influence that brands exert on consumer behaviour means they have also become part of the social history of the times, reflecting the fashion, art, literature, technology, health, sport and social norms of the day…” – Publisher Ken Wilshere-Preston

A history of brands and branding in South Africa uses a narrative of South Africa’s social, economic and political history and consumer culture as a backdrop to the stories of many of our most recognised brands both old and new

With over a thousand pictures and illustrations including advertisements, brand registrations, products, consumer culture and moments in history, many never published before, the book is a colourful and fascinating read. It will be picked up and explored again and again for interesting did-you-knows, but also valuable insights into branding, advertising and intellectual property protection over the years.

Many of the 400-plus brands recorded in this book are over 100 years old. One of these – Groot Constantia, which dates back to 1685, was exporting to Europe as early as the 1700’s. A favourite tipple of Napoleon during his exile on St Helena it was also favoured by King Louis Philippe of France. Google by contrast is a teenager, yet recognised as one of the top four most valuable brands in the world.

The opportunity to build brands moved to another level with the coming of media advertising. Our first newspaper was the bilingual Cape Town Gazette and African Advertiser or Kaapsche Stads Courant en Afrikaansche Berigter, launched on Saturday August 16, 1800. It was owned by slave dealers and privateers Alexander Walker and John Robertson – sole printers to the corrupt Governor Sir George Yong. Space was sold for sixpence a column inch and broked for two or three pence more. Almost 100 years later the first advertising agency, SA Advertising Contractors, was launched in Cape Town in 1899 and continues, after many name and ownership changes to the present day. Brand advertising expenditure in 2010 exceeded 26 billion rand.

The colourful characters, brands and events that helped shape South Africa and turn it into the democratic commercial powerhouse of Africa are all part of this remarkable story that takes us from Groot Constantia to Google and a world in which branding is recognised as the most significant gift that commerce has ever made to popular culture. 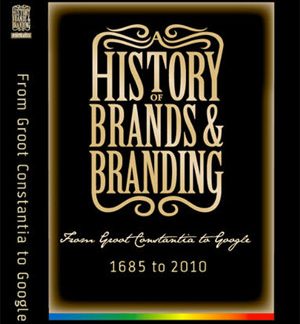